I haven’t quite hit the two-month mark and I had the pleasure of receiving a visitor this past week. There are two people in my life that make it to almost everywhere I live. One is my sister, Clair (who I hope makes it out here before I move) and the other is my friend, Brittni. If any of you follow my social media, you’ll have noticed an influx of pictures and posts! Finally, I had someone to walk around with, someone who would take pictures of/with me, and someone I could use as the experimental focus subject for any developing photography hobby.

At first, it came up fast. It didn’t really hit me that she would be visiting until the week when she was due to show up. All of my coworkers at first thought that this visiting friend was my “hunny”, and upon finding out that, she is really just a good friend, they deemed her “crazy”. I deemed myself lucky and as the time got closer, I became more thankful.

You see, although I’ve enjoyed living alone (post-adapting to living alone), I didn’t realize how much my soul craved a piece of home…and some social interaction where I wasn’t dealing with someone that knew me as a professional.

Day One – Shoveling with Students

As all of my guests will have noticed, I started out in a true “missing you crazy and I want to show you everything” style.

A school employee picked her up on the district sno-go at the airstrip and the adventure was on. Almost immediately, I forced Brittni to walk to the store, then around town…and finally around the neighbors to shovel everybody out. You see, we had a blizzard the day before, the worst that I’ve seen yet, and her first flight was cancelled. She was lucky to get in altogether. Over a 24-hour journey of minimal sleep and bouncing from airport to airport, I led her around the place. I, of course, had not been traveling and was so excited at the newness of having a visitor that adrenaline took over.

As we walked around town, we ran into students of mine, other students, and parents of students. When we started digging out my porch, a group of 5 boys (one of my students, some in the grades above, and two that will be future students) found us and spent most of their time distracting all of our shoveling efforts by climbing onto the nearby shipping crates and doing back flips into the piles of snow. They followed us from house to house and we collected more students as we went. By the time we finished the final house and the sky had darkened, our little army had started to dissipate and make their way back home.

To the store, we go! 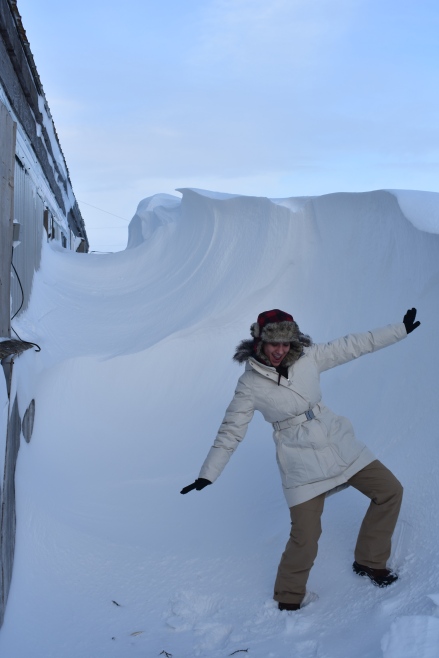 Playing with the wave behind my house.

We didn’t help shovel out this house, he had it under control, but it was worth the picture!

After digging out people from the blizzard, we started what would become our nightly tradition: eating a late dinner and doing puzzles until 3am.

The following day was started by a Harry Potter Movie Marathon and games of Rummy with a coworker and continued with a trip to the store to buy puzzles and newspapers. We spent the rest of the evening with a handful of my coworkers, eating our airplane takeout and sharing stories about the village with each other. I’m sure I’ll share some anonymous stories someday; they are unique and stick in my mind. Stories like where the village keeps their dead and how the clinic works, as well as the whale hunting traditions. But for now, they will go unspoken. 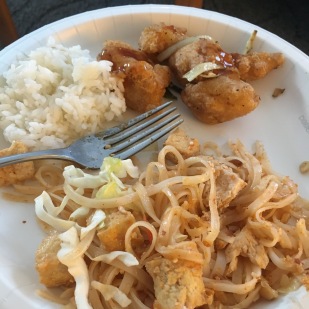 The night wouldn’t have been complete without finishing another puzzle.

I had hoped to take Brittni to a church service the following day, but we had both decided that sleep was necessary and without setting an alarm, we missed our opportunity. After a nice breakfast, we settled down onto the comfy couches (one dog-hair filled comfy loveseat and another not so comfy couch) to work on our crossword puzzles from the area’s newspaper.

It was storming outside and although we had talked to an acquaintance of mine about a sno-go ride, we weren’t surprised when she didn’t call and come pick us up. Instead, we crawled back under our blankets on the couch and read until naps came a-calling. 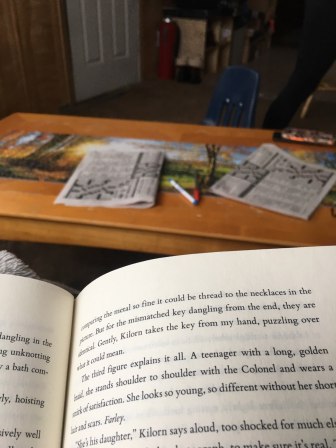 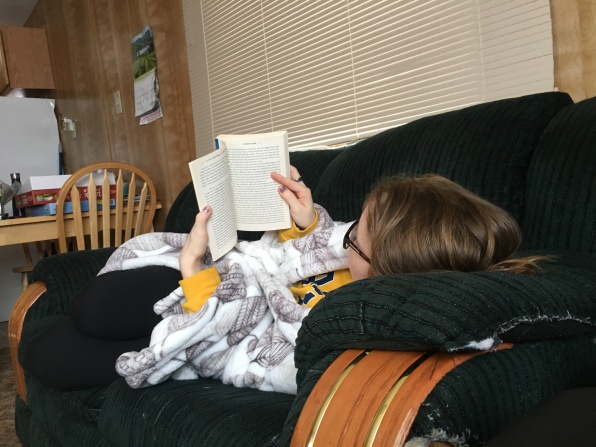 Some more puzzles into the evening and two loads of laundry later, and we called it a night a little early…it was a school night after all.

Brittni came to school with me! The students loved her, and some questioned whether I was her mom or not…which was a new one. After a day of helping me answer the questions of young minds, school had its scheduled early release and went off to a meeting. Brittni got a chance to go walk around, which led her to more shoveling.

One of the important things that I wanted to do with Brittni, was walk across the lagoon (which is two miles wide at one point). I had ridden across the lagoon on a snowmachine, but Brittni and I have always been ones for long walks at odd hours. I felt that it was properly frozen and I promised myself that we would only go where people had taken the sno-gos that day. But..that was before we received a friendly warning…

“Yeah, just around town, but we were thinking of going to the cemetery.”

“Well, take this road, and be careful. You know with the ice frozen. Polar bears. I wouldn’t go anywhere unarmed this time of year.”

It isn’t that I am afraid of bears…but I am incredibly respectful of them, so much so that I have no desire to cross one up close in the wild.

Heeding the warning…or not at all…I wasn’t quite sure what locations were off limits, we set off towards the cemetery and when a set of sno-go tracks took off across the lagoon, so did we.

The lagoon and the area on the other side are what we call “the tundra”. The wind whips across it because there are no trees or buildings, and there is little vegetation.

The unpacked snow meant that every step took two or three times the effort. The warm near-freezing temperatures meant we hadn’t worn jackets, just flannels…but the wind left my arms raw and tingling underneath. The approaching foothills made for a beautiful view, and the miles of flat snow surrounding us made me realize how isolated we were. After walking for a few minutes, we turned around and it seemed that we had made little headway.

That is the amazing thing about the tundra. Everything looks so close, but when you factor in the cold dry air and the drifts of snow, it suddenly becomes much farther. Also, when you are afraid that a polar bear is going to pop up out of nowhere, it makes you (me) anxious. 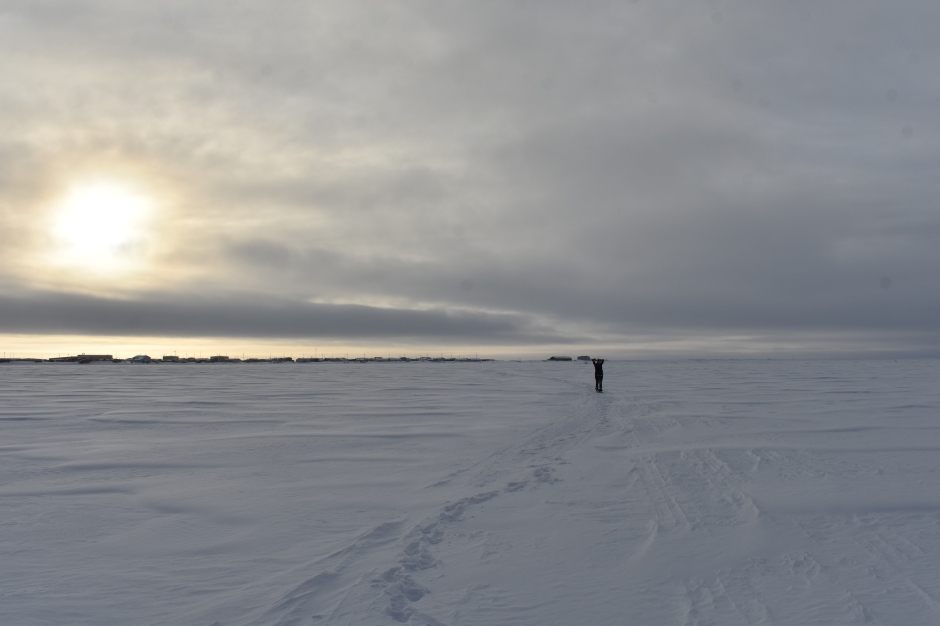 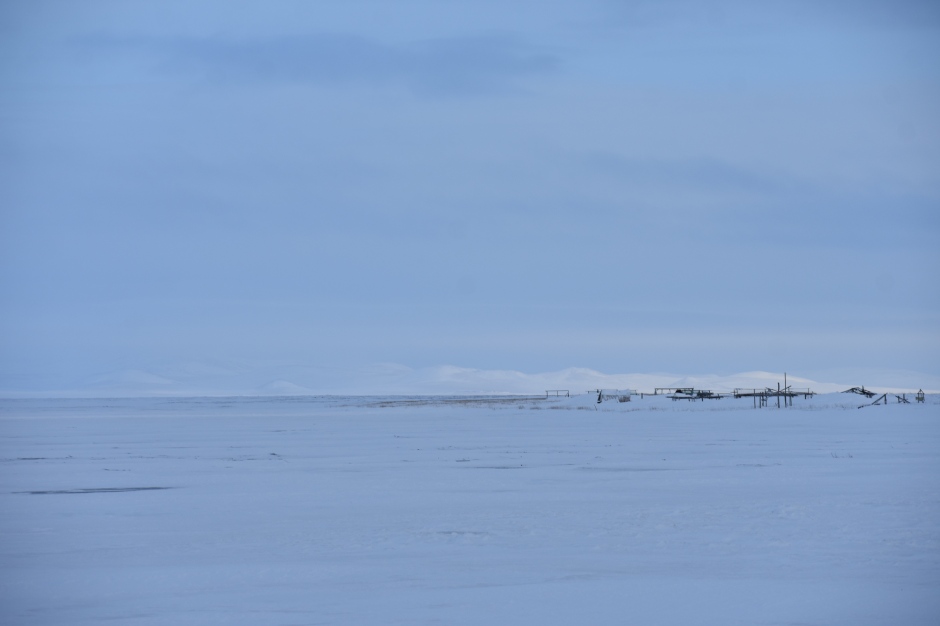 Nonetheless, we made the journey out and back, running into a student or two on the way home and making it home in time for Chili and crazy adventures involving snow piles and shorts. 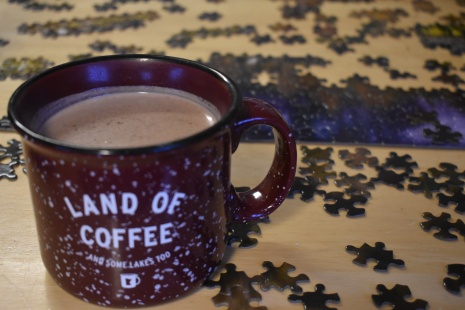 On a side note, I’ve had an awful flemmy cough ever since this day…for some odd reason…

Another fine day at school, Brittni took on another group of eager learners and was able to give them the attention that I normally can’t spread that thin. (I am ever thankful.)

One huge difference came around lunchtime when two separate villagers found out that she was leaving and mentioned that they would have brought her Muktuk to try if they had known. Muktuk is made from whale, and never have I once tried it (or been offered it), so I wish that they would have known so I could have snuck a taste.

The day continued like normal and after exhausting ourselves while dancing our goodbye out over lunch and then playing tag with the third grade during P.E., someone from the office showed up for Brittni. She had a phone call from one of the villagers.

At first, I was confused. I figured they had confused us and it was a parent calling me…but nope, it was for her! One of the local artisans found out she was leaving and wanted to make sure that she had a chance buy some of the Native crafts before she left. This was another thing that almost everyone in the village has been offered (but somehow, not me) …what can I say, Brittni has all the luck!

Her plane was late taking off from a nearby village and the employee that was going to take her to the airstrip took the VHF radio (the main form of communication in the village) to the store and let us know that she would be back. Before we knew it, a plane rumbled overhead, and the employee ran into my classroom grabbing Brittni and her things and just like that, she was on her way! 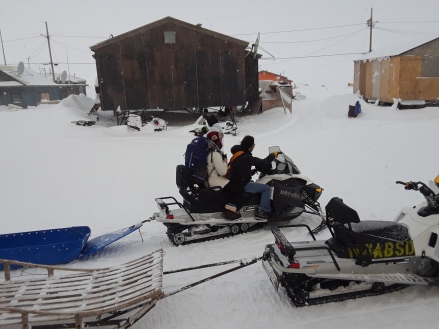 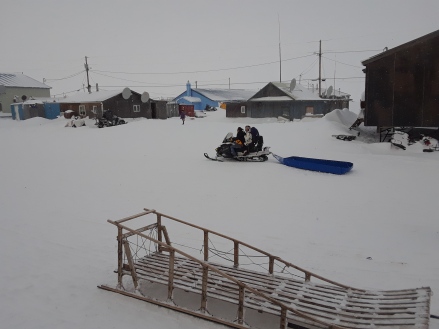 The rest of her journey is a story…but not mine to tell!

I’m incredibly thankful for her visit and the change in my usual routine. It also gave me a new appreciation for where I live. A good friend of mine once told me that I would love my “home” more once I had the chance to show it off…and although that wasn’t ENTIRELY true where I was living at the time of that conversation, it was true here.

Dear potential guests, if you come visit, I can promise you: