I grew up in a family that composted for a while and then began feeding almost all of our food scraps to the laying hens in the backyard. We didn’t often have food that went into the garbage. That’s one of the things I struggled with the most when I moved out. Why did I have to take out my garbage so often? Why did I have to throw away something that could easily better the gardens I wanted but didn’t have?

When I first met my roommate we got to talking about gardening and composting. She mentioned that she had used composting worms in the past. I, for one, had NEVER heard about that as a possibility, even though I knew there were earthworms that could aide in compost piles outside. Worm farms were never in my self-painted future life picture.

Vermiculture is the process of using worms to decompose organic food waste [and other materials like cardboard, paper, yard trimmings, etc].

Between the caterpillars, beetles, Venus Fly Traps, and urban gardening, I’ll admit that I’m down for any sort of nature/gardening related activity in the classroom, but I wasn’t sure how my students would react.

I mentioned it in passing and we continued like nothing had changed.

I did some research and ended up ordering a Worm Composting set on Amazon. (Click this link for Vermiculture

I selected the goods and then tried to check out.

Unfortunately, Uncle Jim’s Worm Farm does NOT deliver to Alaska. I bet “I Got Worms” would…

I tried the last company on Amazon that I found and decided that I might have to scrap using Amazon altogether. Fortunately, Nature’s Good Guys had a review from an arctic Alaskan resident saying that the worms arrived just fine. (The review was from February which gave me hope for getting them in September.)

I started with 600 and figured we’d see how they made it up here before deciding if we needed to invest in more. They double in population ever 90 days anyway.

After a trying full week of school with no testing and few interruptions, my students and I were equally glad it was Friday.

Then amidst some questioning of my own effectiveness and typical self-doubt that comes with managing, engaging, and growing the knowledge of other humans, a few coworkers showed up at the computer lab door while we finished up Technology time.

“What did you get shipped up here? It says ‘live’!” 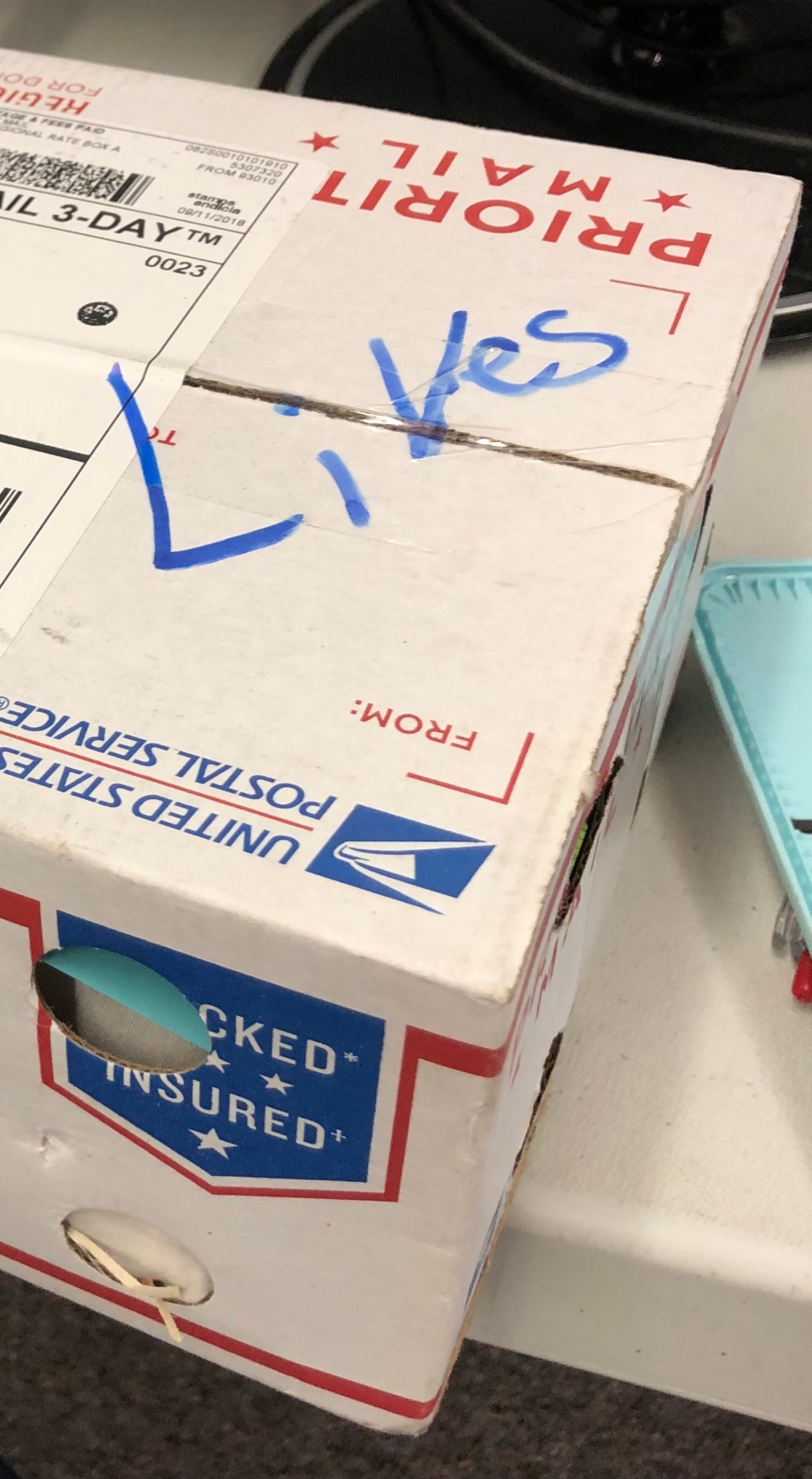 My students in the computer lab reacted like this:

They yelled up and down the hallway to anyone that would listen. Every passerby soon learned that 3rd grade had worms. Real LIVE worms.

The faces on adults was of bewilderment and slight disgust as they turned to me for confirmation. I’d nod and we made our way into the classroom where the other half of my students learned Inupiaq.

Once the [worms] were out of the bag and everyone knew, there was no hiding it. I had to come up with a weekend plan for a worm habitat…and my students wouldn’t rest until they saw them. Goodbye Friday plans, hello spontaneous worm habitat-building field trip and lesson plans.

After math was done for the day, the class and I made our way out to the beach. We picked up a little sand for grit (which apparently is good for the worms), some plants that were dead or would soon be as students snatched them from the sand, and a few students grabbed some recycling on the way in.

I turned on the Magic School Bus for the students that didn’t want to partake in all of the worm fun, while 10 of my 11 students gathered at the back table to cut and shred paper, cardboard lunchbox trays, and organic matter.

We talked about things we can feed the worms and how we need a moist habitat. They decided they wanted to name the worms (which led to a Stephan Curry, Michael Jordan, and [Student’s Name] Jr.). 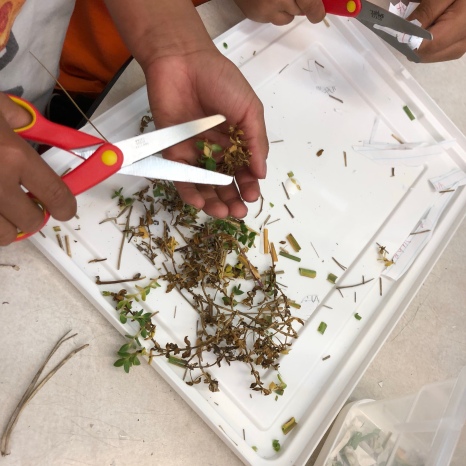 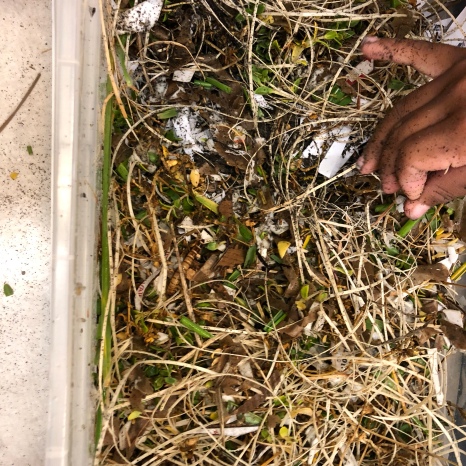 We also had an unexpected visitor in the worm box—a millipede. We initially let him be the first arrival to the new habitat, however, one student posed a good question.

“What if he eats the worms?”

I had an instant flashback to capturing a beetle a few years ago and putting him in my second grade classroom terrarium with Larry the Venus Fly Trap. My students questioned his motives and were skeptical, but I waved those concerns away. Until a few mornings later when I came in to find our Venus Fly Trap beheaded and the students shouting for the eviction of the murderous beetle.

“Good question,” I responded,  “we’ll take him out and put him in a different place and I’ll research.”

I did not go through the trouble of getting them excited about worms and getting worms shipped to the arctic to have them eaten by a fellow small creature.

There was only one brave soul who would attempt to move Thunder, the millipede, to his new home. She cornered him and picked him up. He wiggled against her finger. Her shocked reaction at his movement was immediate. She screamed and flung her hand up and down. He flew across the room as if in slow motion. Up and down, before the entire class was screaming, both in shock and excitement.

When multiple adults rushed to our room, they saw me standing watch over a hoard of students screaming and sharing contagious giggles in a circle on the floor as they attempted build up their bravery to capture him.

“All this over worms?”

…and then some. They smiled and nodded before closing the door behind them.

Thunder was eventually captured and put into his solitary home, awaiting further research. The worms were transferred over to their new home, given some vegetable scraps from my lunch, and tucked into a dark cabinet for the weekend. 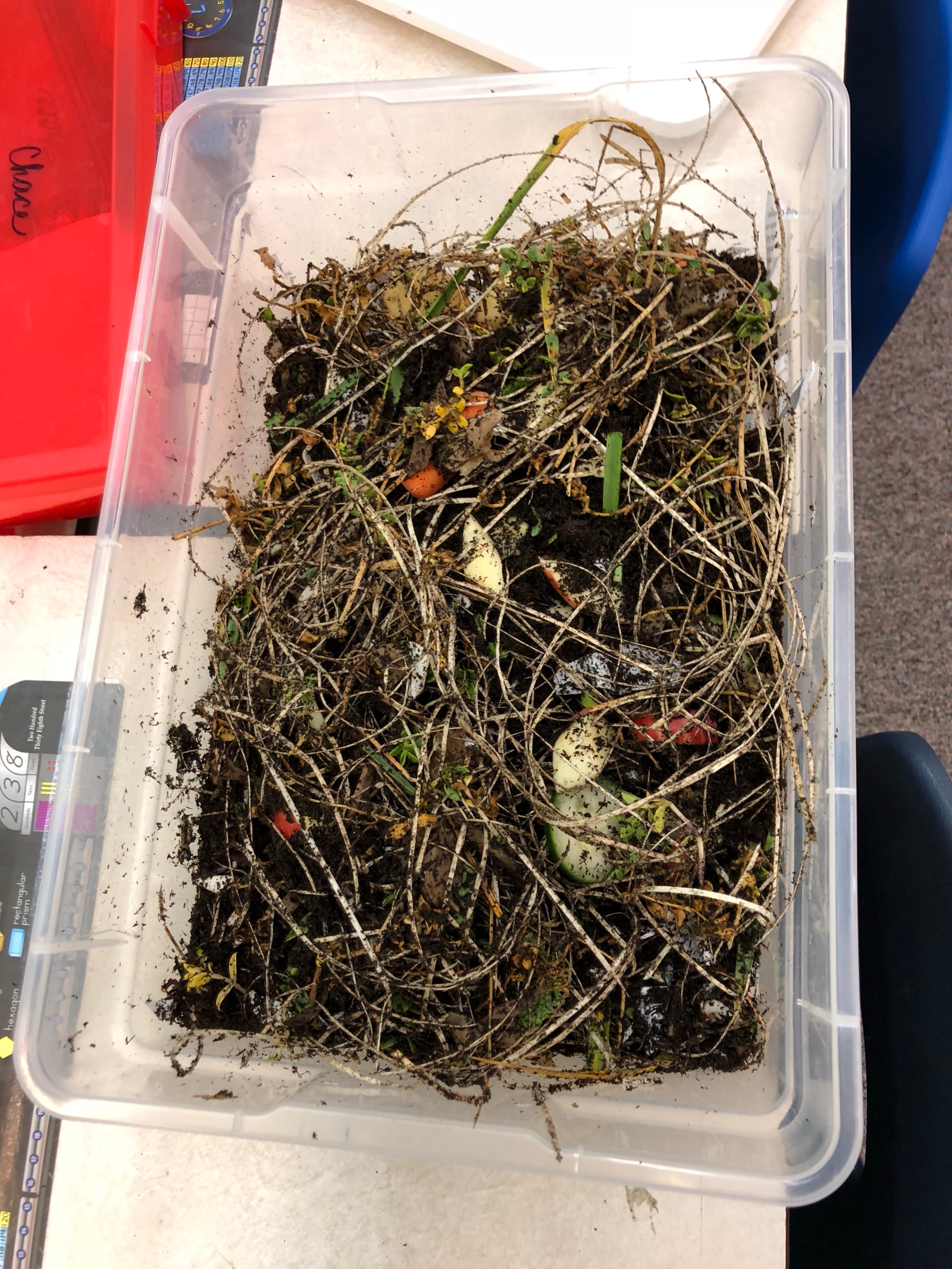 I’ll keep you posted as it plays out, but honestly so far, it’s been worth it.

Here’s to thinking we’ll need a Venus Fly Trap before winter comes…and maybe some other plants too.

I do not own the Dumb and Dumber material, but worms reminded me and the staff of the movie…and I’m overdue to rewatch it.